News
Home > News
The first one in China! Regulations on the Administration of Pollutants from Ships in Zhoushan Port
Addtime：2021-03-31     Browse：48    Author：admin
Back

At the 28th meeting of the Standing Committee of the 13th Provincial People’s Congress held on March 26, the Regulations on the Administration of Pollutants from Ships in Zhoushan Port were adopted by a full vote and will come into implementation on July 1. The Regulations are the first local regulations to regulate the administration of pollutants from port ships in China, filling the gaps in the superior law and providing a clear legal basis for the “seamless sea-and-land transfer” of pollutants from port ships.

The Regulations stipulate that port ships that do not meet the discharge requirements shall receive and land pollutants by classification, and create a clear joint list system for pollutant transfer and disposal, stipulating that joint list shall be filled in and run for key links such as receiving operation, transfer operation and disposal operation, which specify the types, quantities and direction of pollutant transfer and disposal. The data of the joint list is shared by regulatory departments. For those who fail to fill in and run the joint list in accordance with the relevant provisions, the Regulations also puts in place corresponding penalties for different situations and entities.

“It solves the problem of blind area of regulation in the receiving section and forms the closed-loop administration of the whole process of port ship pollutants” said Yu Caibin, deputy investigator of the Municipal Bureau of Ecology and Environment, he also says that the biggest problem in the disposal of marine pollutants lies in the fact that they are produced at sea and disposed of on shore, and that there are perfect legal systems for disposal of pollutants on land and at sea, but the transfer pollutants between land and sea is a blank area, there is no legal provisions in superior law for this regard, there are “loopholes” in administration, and the Regulations fills up such blank area.

The responsible persons of Zhoushan MSA also indicated that the corresponding penalties in the Regulations solved the embarrassment of difficult punishment for violations in the handover section and provided strong legal support for law enforcement. 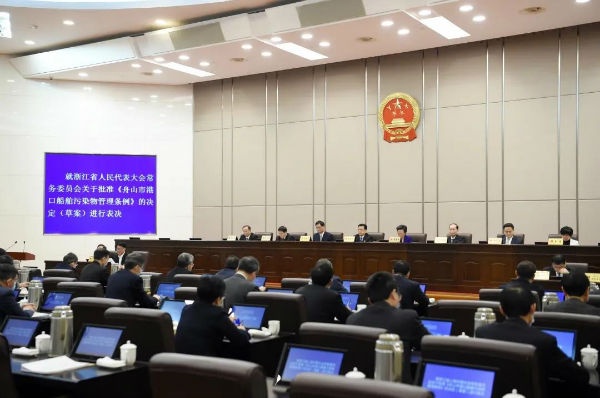